After a short flight from Cancun in a vintage Russian plane, my group was driven into Havana past sugar cane fields, which gave way to houses, tiendas (small shops) and the shaded parks of the suburbs. We passed baroque and neo-classical mansions as well as more modern buildings but all were in poor condition and were occupied by more than one family. Apartment houses constructed by the Russians were utilitarian but lifeless boxes. 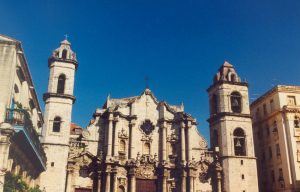 We arrived after dark at the Malecon, the famous walkway bordering the sea, and I knew we were in the Havana I’d read about. Couples arm in arm, and families strolled along the walkway, enjoying the cool sea breeze though they wore sweaters against the mild temperature we thought was wonderful. On the inland side were four to six story buildings built or renovated in the 1940’s during what some would say it was Cuba’s Hey Day before the revolution. Others including Castro thought it was the height of decadence when Cuba was a center of prostitution, drug trafficking and gambling run by US crime bosses. Some of the old buildings were only shells, with the outer walls left standing until money for rebuilding was found. The moon shone through empty window spaces like the blank stares of the blind.

Our guide had made special arrangements to get our baggage-loaded minibus close to our hotel through cobble-stoned streets that were blocked off to most motor traffic. We were in Old Havana, where the buildings that lined the narrow streets were truly elegant, though many were ready for renovations. At the street level, heavy wooden doors opened into dim interiors through which we occasionally saw a bit of a central patio. Arched windows were secured by ornamental bars and above the street, balconies overflowed with draping flowers. Old Havana was built in the 16th and 17th centuries when it was the primary transshipment port for Spanish square-rigged vessels moving tons of gold and silver from mines in South America. Ships gathered annually in Havana harbor to form convoys to protect their cargo from pirates and to await the seasonal winds that would return them to Spain. The buildings reminded me of very old ladies who were once stunningly beautiful. Good bones but lots of wrinkles. The facades speak of Spanish elegance while the gutted insides tell the sadder story of neglect. Fortunately, some of the old ladies are getting face-lifts. Foreign money is enabling the revival of the buildings suffering from the years after the revolution. The renovation on our hotel was completed, and she was once again a proud representative of a past era.

The Ambos Mundos Hotel staff welcomed us with complimentary mojitos made with rum and sugar cane juice. We sat on fat sofas in the elegant interior that had high ceilings and tiled walls and floors while we waited for our room keys. An ancient elevator stood next to the stairway that disappeared into the ceiling and nearby was a display of pictures of Ernest Hemingway, who lived in the hotel for a few years.

At my first opportunity, I strolled the narrow, shady streets around my hotel. The buildings were built right up to the edge of the crumbling, narrow sidewalks that were used only as a last resort by pedestrians who crowded the street. I squeezed past trucks parked half on the sidewalk to make their deliveries. The few store windows had dusty displays of what might be inside, clothing, bakery items, books, though many were not open. Between the shops, a dark doorway opened to a flight of stairs on one side to the residences above, and a passageway on the other into a tunnel with sunlight at the end, the inner courtyard for the building. A man in threadbare clothes lounged on the doorframe, smoking. Another door opened into a living room where an older woman sat on a metal chair with a cracked plastic seat fanning herself and watching the blue flicker of a television.

Another very hot day, on my way to find food, the cool shadows gave welcome relief from the scorching sun. An old apothecary had been restored for tourists next to the hotel, and the shelves were filled with aged glass jars labeled in flowery script. Even during the day, some of restaurants had their own small group of musicians playing for tips and competing with each other in the confined spaces. A take-out pizza sign tacked to yet another dark doorway tempted bustling Cubans and strolling tourists alike. I paid a boy who sat at a tiny table in the doorway. He yelled upstairs and soon, a young woman raced down with my slice on a paper plate. It was quite tasty.