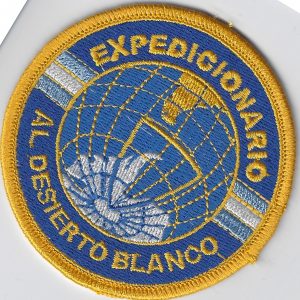 More than fifteen years later after this adventure, I remember most Antarctica’s isolation and its pristine landscape, rarely marred with a human structure. The humbling sight from shore of an enormous glacier dwarfing our ship as it anchored in one of the bays is unforgettable. Crystal clear water, hanging ice cliffs, and floating icebergs, all took my breath away with their beauty while also pulsing with potential danger. For me, there were many reminders of early explorers who endured the wild storms, bitter cold, treacherous ice, menacing meat-eating seals, and starvation. Some explorers died and others survived. I was fortunate to witness the Antarctic firsthand, see these places explorers described in their accounts, and return safely in relative comfort.

Amidst the spellbinding scenery, the wildlife that thrives on the edge of that forbidding continent is unforgettable. It is humbling to understand the incredible adaptations that Antarctic polar species have undergone to live in such an unforgiving land. Just watching a sleepy crabeater seal raise his curious head off his iceberg, knowing that he never goes ashore, boggled my mind. As humans, we are such land-oriented creatures, and there I was, observing an animal that never even thinks of land as part of his world.

While I feel fortunate to have traveled to Antarctica, the continent now faces challenges to control the tourism boom. In 2009, the Falklands received 69,000 visitors, many on enormous cruise ships that carried up to 5,000 passengers. That same year, the International Association of Antarctic Tourism Operators (IAATO) prohibited the large ships from visiting most of the Antarctic Peninsula for fear of an accident and resulting oil spills. None of these cruise ships had a reinforced hull like our small ship. Now, most ships allowed to travel to Antarctica carry fewer than 200 passengers.

​The Falklands have also made progress to protect its archipelago. After signing the U.N. Landmine Treaty in 2010, the British returned with greater resolve to remove the landmines planted during the war in the Falklands. The once small landmine museum in Stanley has been expanded to cover more of the history of the Falklands and give visitors a broader understanding of this part of the world.

In 2014, cruise ships brought about 40,000 passengers to the Falklands, and the ships now pay a per-passenger fee for docking for the night. These fees have enriched the Falklands overall revenue, more than making up for the decline in revenue from wool sales, fishing, and other small industries. Given the increased market for clothing made with natural fibers, I wonder if the wool market might even recover. In addition, farmers on the islands can now depend on monthly deliveries by inter-island shipping services, and light seaplanes service the islands for emergencies.

“That such a wondrous and unspoiled place still exists on this beleaguered planet is one of the real miracles of the 20th century. The indescribable splendor of the magnificent final frontier and its remarkable wildlife must be forever regarded as an irreplaceable international treasure that justly deserves to be protected indefinitely for future generations.”

As an ambassador, I know I need to make more people aware of the Antarctic and the continent of Antarctica, and the environmental threats to this part of the world and its wildlife. Admittedly, I am terrified to know that almost all of the Antarctic wildlife depends on billions of tiny krill, the foundation of the food chain. Krill is so fragile, yet so essential, and if the ice melts in the future, wildlife dependent on krill must be able to adapt, or they will die off—just as other species in crises have done in the past. With today’s discouraging climate change predictions, I wonder, What can replace krill in time to feed all the wildlife so dependent on this food source?

On the other end of the climate change spectrum, I am deeply concerned about scientists’ 2013 discovery that there is a major rift at the base of the ice shelf 20 miles inland on the Pine Island Glacier in West Antarctica. In 2015, a 224-square-mile iceberg broke off from the glacier. Warming ocean temperatures have caused the glacier to crack from the inside out—a surprise to scientists. If this trend continues, the ice sheet could collapse within decades, causing a predicted 10-foot rise in global sea levels and massive coastal flooding that puts cities like Miami and New York City underwater.  “It’s generally accepted that it’s no longer a question of whether the West Antarctic Ice Sheet will melt, it’s a question of when,” said study leader Ian Howat, associate professor of earth sciences at Ohio State. “This kind of rifting behavior provides another mechanism for rapid retreat of these glaciers, adding to the probability that we may see significant collapse of West Antarctica in our lifetimes.” (ref: THE WEEK, Dec. 16, 2016/Ian Howat, Earthsciences professor at Ohio State University).

From the krill to the glaciers, the Antarctic region and the continent of Antarctica must be protected against the onslaught of humanity and our negative environmental impact.

I was fortunate to have been able to indulge my curiosity and feed my passion for Antarctica, such a fascinating and dangerously bedazzling place. At the same time, I am heartbroken that it could all be lost. As a South Polar Ambassador, I will do what I can to prevent that by supporting the work to prevent further climate change, which is the underlying cause for the disintegration of the ice on Antarctica. Sharing my experiences in Antarctica and speaking out for its protection are the least I can do as a South Polar Ambassador.