After our tasty Thanksgiving dinner, we moved to the comfortable lounge where Julio prepared us, once again, for shore visits. The small craft landings in the Falkland Islands were practice runs, trials for proper clothing, transportation, and discipline. The mild consequences of mistakes during the Falkland shore landings were minimal. Now, anyone who wandered off in Antarctica could die. We listened carefully.

“Tomorrow, we will land on the rocky beach of Penguin Island, one of the South Shetland Islands. This is a 335-mile-long chain of islands located about 75 miles north of the Antarctic Peninsula.” Julio pointed to his map on the wall. Then he added, “Several of our landing sites are in these islands because they are the first places to be free of snow and because of that, many of the research and whalers’ stations are here.

“OK. This is your first test. Do you remember your landing group number?”

Everyone chuckled and repeated their number. He reminded us to remain in our cabins until he called our group for loading. “Finally, and most important, please do not forget to walk through the shallow pan of disinfectant on the departure deck to prevent passing disease from one colony to another. Do this coming and going. We must be very careful about this.”

We all wore rubber boots from then on since any hikes were short. Each of us had to give our boots a swish for a few seconds in the unavoidable pan every time we passed through the departure deck, a crowded hall one deck above the water level where a large door could be opened to the outside. “Please remember that my crew can get anyone ashore who wants to go.”

This was a generous offer because we had several passengers with mobility issues. I liked that he included everyone. I thought, I could be one of those less able people at some time in the future. Who knows? Maybe this trip will be so fabulous I’ll have to do it again!

I was so excited I could hardly focus on what he said. My thoughts raced. I know all that. Just get me into that Zodiac. I want to put my foot on Antarctica.

That night I hardly slept. At last, the first light of day peeked through my porthole. Oh,boy! Today I’ll actually step where explorers walked almost one hundred years ago.

At Last! Landing on Antarctica

Breakfast took forever. My group would be third to leave, so I partially dressed in long underwear, warm pants, waterproof rain pants, and overshoes. This time I needed every layer I had, but I held off on my fleece sweater and red jacket until the announcement for us to go to the landing area. My pack held my camera, binoculars, hat, gloves, and water, as instructed. The announcer made final suggestions on what to wear. “Be prepared for wind and sun.  Don’t forget your gloves.”

I waited in my cabin as directed, until the call for departures came over the cabin speaker. A woman’s voice said, “Julio has gone ashore and found a site clear of wildlife for your landing and the shore crew is awaiting your arrival.”

In the brisk air of Deck 2, I finished dressing, donned my life jacket, and cinched it up. Ready. A young crewman offered his strong hands as I climbed down the metal stairs to the floating Zodiac platform. Another crewmember helped me over the thick rubber sides of the inflatable boat, and off we went. Antarctica, here I come! 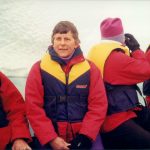 The Zodiac bounced over small, choppy waves licked up by the stiff breeze. I was dressed for the harsh weather and grateful for all my heavy clothing. The ship’s log reported a noon temperature of 38° F. Spring weather! Think of that.

Under overcast skies, I slid off the side of the Zodiac and waded the few steps to the pebbled shore, peppered with occasional boulders. That was it. Suddenly I was standing on Antarctica. Ta Da! Then I thought, Where are the trumpets? The gongs? The cymbals?

Mixing with the Local Wildlife

A nine-foot-long Weddell Seal raised a lazy eyelid to watch us pile up our life jackets once we got off the Zodiacs. Abundant and placid, these seals are the most studied in Antarctica. Small Chinstrap Penguins nonchalantly walked past us, not far from the resting Weddell seals, uninterested in our activities. Chinstraps are one of the smallest penguins at 30″ tall, distinguished by a white face with a black “strap” that goes under their chin. Several chinstraps stood where a flow of small boulders tumbled into the sea. They studied the waves, waiting for the right one to arrive, before plunging into the cold water.

Some passengers stayed on the beach to study the Elephant Seals, also known as sea elephants with their fat floppy bodies as big as a legless elephant. A full grown male can weigh over 8,000 pounds, dive to 5,000 feet for food, and can be very aggressive during breeding season. These males have a giant proboscus (nose), like an elephant, the source of the species’ name. Down the beach from us, a jelly-wiggling heap of about ten of these seals seemed to be resting, eyes closed, after a good meal. I pitied the ones on the bottom of the pile. Not a giant nose among them, so we were safe.

After two full days confined to the ship, I especially welcomed the optional climb up the edge of a volcanic cinder cone. Many of the islands in the Antarctic Peninsula are the remainders of volcanic activity, some fairly recent. Julio had promised us the opportunity to take advantage of an open-air spa at another stop, which I found intriguing. What next? 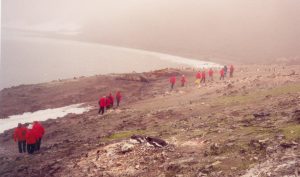 From the top of the cinder cone, we could see big and small ice chunks that filled the sea surrounding Penguin Island. Nearby King George Island looked like another old volcano. I marveled, What a concept! Volcanoes in Antarctica! As hard to believe as the glacier I saw years ago on Mount. Kilimanjaro, located right on the equator. This Earth is so amazing.

Back on the gravelly beach, I strolled past bleached whale bones, bits of wood, and streams of chinstrap penguins marching to and from the ocean to their colony on the steep slope behind the beach. The loud penguin calls increased in volume and filled the air as we approached the colony. The Giant Petrels nesting up the hill behind the chinstraps, flew in and out with food for their chicks. We stayed a good distance from them after noticing the Skuas watching for the unattended egg.

Julio was the beach master that day, and we peppered him with questions. I needed confirmation that we were actually on Antarctica’s land mass.

“Yes, this is Antarctica, but it is not the mainland. We are saving that for another landing.”

OK, I wasn’t on the mainland of Antarctica, but technically Penguin Island was good enough for me. And for the many tourists on the huge ships, they only get a view of these islands—no shore trips at all. I thrilled to think of the many more times I would go ashore before the end of this trip! Yay!

We had about two hours to sit, climb, and explore the island. After that, we all made it back to the Zodiacs at the appointed time.

Half Moon Island & the Lonely Dinghy

On our way to the next stop, several Antarctic Petrels with their bold, brown-and-white markings, flew in synchronized formation behind the ship as others had on our way south. In the afternoon, the sun broke through, but the wind still felt sharp.

On Half Moon Island we had another chance to see wildlife and remnants of history on the shore. Right away, the partially decayed, open wooden boat, twenty-five-feet long and half covered with snow, grabbed my interest. Julio thought the beamy and heavily built boat could have been an old water tender to a whaling ship. The boat had been built using lapstrake construction, a method of attaching planks to frames and to themselves, which added strength to the hull. This reminded me of my own sailing days when I lived in Port Townsend, Washington. The town is a center of wooden boat building and a few artisans there continue to build wooden dinghies using lapstrake construction.

That sturdy dinghy on the shore of Half Moon Island must have been there for at least 75 years. In Oregon, it would have been totally rotted with ferns growing out of it, but in the cold of Antarctica, the well-built craft held together amazingly well. Later, I realized that the old tender was about the size of boat that Shackleton and his men sailed and rowed on their 800-mile, epic journey from Elephant Island to the South Georgia Islands. My husband and I had sailed a fiberglass boat about the same size from San Diego to Mazatlan, and back. As we sailed north toward San Diego, the November winds gusted to 40 knots, which the Beaufort wind force scale describes as “gale force.” Shackleton and his crew had to battle much worse weather and in an open boat in Antarctica.

After studying the boat for a long time, I looked up and noticed a chinstrap penguin struggling through mushy snow from her nest up the hill. The half-melted snow did not allow her to march with confidence and she often broke through a patch of crusty of ice. Half snowbound, she had the choice to work hard to regain her upright posture, or she could slide on her belly, pushing with her feet on the mushy snow. She alternated between the two modes of travel, taking much longer than it would have traversing hard snow or clean rocks. She must have been exhausted, but I doubt that thought would have crossed her mind. Driven by instinct, wild animals just do what needs to be done.