At six in the morning of the sixth day, I awoke to Julio’s low voice over the speaker in my room. He almost whispered, “If you are awake, come up on deck to see the icebergs.”

Jumping into my clothes, I donned my red jacket, and hurried up the two flights of stairs. Through sleepy eyes, I watched in awe as we passed massive tabular icebergs with flat tops and straight sides so large they dwarfed our ship. All of us early birds stood on the deck, mesmerized by the beauty and size of the icebergs. The stunning colors ranged from deep blue and blue-green to a lighter blue to the most predominant white, depending on how much air the ice contained. The ship inched along with just enough movement to steer so we could take a long look without hitting an iceberg. We had entered Iceberg Alley, a name well earned. Wind and currents conspire to keep Iceberg Alley, also known as Antarctic Sound, reliably full of tabular icebergs floating freely in the water, their sparkling bulk several times the size of our 330-foot vessel.

Without something for size comparison, I asked Julio, “How tall are these icebergs?”

“Well, these are not really big ones, maybe one hundred feet high, about as tall as a ten-story building. And remember, only ten percent of the berg by weight is above water. These all go way down.”

“Oh, I think the largest one reported was close to the size of Connecticut. It floated around for about three years. They even tracked it by satellite.”

So, these bergs are the pipsqueaks, I thought. Oh, my.

Julio added, “We’ll see a lot of the smaller ones, bergy bits, that are up to sixteen feet high, and growlers, smaller than three feet.” 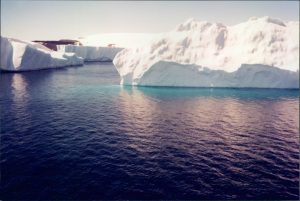 Icebergs originate on land as glacier ice. The weight of years of snowfall on the glaciers compresses any air trapped in the ice below, making the ice very dense. Put this ice in water and it fizzes as the air expands. All glacier ice behaves like this. I first saw this phenomenon as a teenager at a science exhibit in 1962 at the Seattle World’s Fair. An Inuit in native clothing at the Alaskan tourism booth showed this glacier activity to visitors. I found the demonstration so interesting that I watched it three times.

A glacier in Antarctica and Alaska takes millennia to slide across the rock base and slip into the bay, thus, our expression “at glacial speed” for “really slow.” Once free of the land, and with only seawater under the compacted and floating ice sheet, the glacier fractures, eventually breaking up, and the pieces float off in the form of the tabular icebergs we saw in Iceberg Alley. After wind and sea work on the shapes of these enormous chunks of ice, they can be extremely dangerous. They lose bulk below the water, become unstable, and can suddenly turn over without warning, reorienting to the new distribution of mass. I wondered if anyone has ever seen an iceberg flip over, something I would love to see.

This reminded me of a similar quick, and rarely seen event that I had witnessed: a tree falling in the forest. It occurred on the shore of the Amazon River in a tropical Peruvian jungle. A rifle-crack-like sound from the snap of the critical vine holding up a heavy tree announced the beginning. A small group of us watched as the tree slowly broke away from the others, accompanied by loud cracks and pops as the vines that climbed the trunk broke. Tangled in a web of other vines and trees, the tree fell to the forest floor. It would be hard for any tour company to schedule such an event and we were delighted at the surprise!

Our ship sailed 30 miles through Iceberg Alley, the 7- to-10-mile-wide passage between the tip of the Trinity Peninsula, the northern most point of continental Antarctica, and several of the many offshore islands.

I ate breakfast in the ship’s warm dining room and enjoyed watching the icebergs as we slowly navigated to the east end of Iceberg Alley and anchored in Hope Bay. A small cluster of buildings perched on the edge of the continent, the corrugated metal roofs and red painted sides characteristic of most of the aging buildings we saw in Antarctica.

Our next stop was the Argentina settlement, Esperanza Base, built in 1952. The Argentinians maintain the handful of buildings year round with only a small contingent remaining during the winter.

The previous evening’s lecture prepared us for this extraordinary opportunity to set foot on Antarctica, the continent itself, rather than just one of the islands. We knew the rules: No souvenirs and don’t remove feathers, rocks, sand—anything. Imagine the impact if thousands of tourists each took a handful of penguin stones.

Hawaiians protect Haleakala, one of their sacred volcanoes, by telling tourists they will have bad luck if they take anything from there. It works for them. Maybe the Antarctic operators need to start a similar myth, especially since the association of tour operators in Antarctica are invested in keeping the continent appealing to their clients. Unfortunately for me, I had planned to collect penguin stones as my gifts for friends and family. Immediately, I had to reconsider my options and respect the high value the penguins placed on each precious stone.

After a brief ride in the Zodiac, we arrived at the landing site, a sloping gravel beach near the buildings. When I climbed out of the boat, I had that same thrill as when I stepped on to Penguin Island, but this time I stepped on to the continent of Antarctica for the first time. Wow, I thought, if could just keep walking, I could be at the South Pole in no time. Very funny, Harriet!

I moved away from the rest of the group to spend a little time alone. Taking a deep breath, I savored the moment. I closed my eyes and listened to the shush of the waves, the murmur of the other passengers in the distance, and distant penguin calls. Then I contemplated the rippling water, and in the distance, steep rocky crags starkly jutting out of the ocean. I breathed it all in—Antarctica. I am standing on Antarctica. That astounding realization melted into my body.

After several minutes I pulled my self away to join the others for a brief tour of the settlement. A young Argentinian man offered to show us around his home. Tinny music, thin and metallic, blared over old loudspeakers, following us from the outside to the inside during our tour. It was annoying to say the least, but maybe the quiet that I loved became too much for the residents after months and months of it. The station included a school for the staff’s 20 or so kids. The students must have been at lunch when we peeked in the simple schoolroom, and only saw a chalkboard. We also visited a small one-room museum, and a commissary where we could send a postcard with Esperanza Base’s unique postal stamp. I sent a card to myself as a reminder of my visit to this wonderful place. That ended our brief tour of the buildings, so our guide proudly suggested we visit the Adélie Penguin colony behind the base. 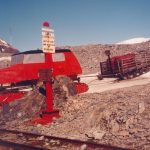 The early French explorer, Dumont d’Urville, named the Adélie penguins after his wife. They are one of the smallest penguins and have a stark white front, a pitch-black head and back, and a white ring around each eye. Years before my visit, I read that not only had the Esperanza Base been built on top of the largest Adélie penguin nesting colony in the world, but that trash from the base encroached upon what remained of the colony. Although Antarctica had called to me most of my life, I did not want to participate in the destruction of such a treasure. Then things changed. In the late 1980s, research stations began to recognize the damage they were doing to the environment, especially with the dumping of toxic wastes. By 2001, the colony had 125,000 nesting pairs and one staff person at the base whose sole duty is to protect the penguins and their surrounding environment. When we visited, the penguin protector had roped off the colony to prevent trespassing after the penguins leave for their post-breeding migrations.

One pair of Adélie had already laid their two eggs. The brooding bird lay flat on the nest while the other busily moved rocks from one place to another. Choosing the right pebble seemed to take great concentration, but as I watched the penguins’ activities, a helicopter flew off from the base, completely destroying my mood. After a short period of frantic activity, the Adelies settled down again. I noted that the penguin on the nest had stayed glued to her spot, to the frustration of the hovering skuas looking for a meal.

Fortunately, I did discover an exception to the no-souvenir rule. While we waited for our Zodiac ride back to the ship from Esperanza Base, I spotted a large building where the staff sorted trash for appropriate disposal. I asked the ship’s shore captain who waited with us, “Is there still a problem with the base being built on the Adélie colony?”

“Oh, a little. The Argentinians removed their trash after the nations involved in research in Antarctica signed the agreement in 1959 to clean up the sites,” explained the guide. “But there is still small stuff in the rocks behind the sorting building.”

“Would anyone mind if I took some of the bits home?” I asked.

His face lit up at the novel idea. “The tour operators’ association might even make you a member if you did,” he chuckled.

Not waiting for him to retract his invitation, I sauntered over to the rock-filled pier where the rusty metal clutter lay tucked among the small round rocks. I pretended to study the few nests and birds nearby in case someone should see me. With my boot, I scuffled the stones, unearthing the bent nails, washers, brittle cable pieces, and my prize, two angle irons held together with a large bolt. This could be a new activity for tourists, I thought. Trash removal. Bring home a genuine piece of Antarctica trash.

I stuffed my treasures in my pockets—I had big pockets—and strolled back to the landing pier. Spotting a stone hut down the beach a way, I asked Julio about it.

“Three members of the Swedish Antarctic Expedition spent a terrible winter in that hut in 1903,” Julio explained. “The base staff rebuilt it recently to honor the hardships endured by those three explorers.”

That accounted for the hut’s good condition. My Zodiac arrived, and I forgot about the hut—that is until we visited Paulet Island, which played a role in the Shackleton saga.