In high school, I had read Endurance: Shackleton’s Incredible Voyage by Alfred Lansing, first published in 1959. When I learned about this dramatic exploration, my imagination went wild. I have always loved true adventure stories and this account of Sir Ernest Shackleton’s expedition was riveting. The descriptions of Antarctica and its severe polar conditions fired up my curiosity about such a remote and desolate place.

In Shackelton’s day, all of the “firsts” of exploration in Antarctica had been claimed except for one: crossing the entire continent. Shackleton resolved to do just that—to cross the continent from the Weddell Sea to the South Pole, and on to the Ross Sea. However, in 1914 Shackleton and his 27 crew members soon faced daunting challenges that brought them to the brink of death, yet they all survived after almost seventeen months in Antarctica’s frozen landscape. The following description from the Shackleton Exhibit at the American Museum of Natural History sums up the expedition:

Just one day’s sail from the continent [of Antarctica], the ship Endurance became trapped in sea ice. Frozen fast for ten months, the ship was crushed and destroyed by ice pressure, and the crew was forced to abandon ship. After camping on the ice for five months, Shackleton made two open boat journeys, one of which—a treacherous 800-mile ocean crossing to South Georgia Island—is now considered one of the greatest boat journeys in history. Trekking across the mountains of South Georgia, Shackleton reached the island’s remote whaling station, organized a rescue team, and saved all of the men he had left behind.

Ever since reading that book I have thought, What an amazing journey.

Not a single man died on the expedition during the many months of freezing weather, starvation, and isolation in Antarctica. In my own life, during difficult times, recalling Shackleton’s story has given me courage to push myself and prevail.

Prior to Shackleton’s expedition, only whalers and a few explorers had touched the shores of this frozen continent. Some died there, but most sailed for home after only a brief stay of weeks or months. For years after Shackleton’s Antarctica expedition, only a handful of researchers and the last of the old-time whalers ventured to the area. However, in the mid-20th century travel to Antarctica increased, and human impact on the once isolated landscape became a problem. I had read that some of the research stations dumped their refuse on penguin colonies, which I found distressing. When the first sizable tourist cruises ventured to Antarctica in the 1960s, they threw their trash off the ships. Both discoveries shocked me deeply and I vowed to not contribute to its degradation. Although I had wanted to see this continent for most of my life, and get a firsthand sense of this strange land, I lost hope that I could ever visit Antarctica.

All of that changed when my local Audubon Society in Portland, Oregon scheduled a trip to Antarctica for November 2001. For me, the timing for this trip was excellent. Birding had recently captivated me and I knew the Audubon Society had the integrity to schedule a trip with a touring company that respected the wildlife.

Falkland Islands
On November 19, 2001, I flew with 22 fellow birders from Portland, Oregon to the Falkland Islands where the polar expedition vessel, Clipper Adventurer, now named Sea Adventurer, waited to take about 75 passengers to Antarctica. All of us were still reeling from the devastating 9/11 terrorist attacks on the United States, which influenced many tourists to cancel their Antarctic trip. However, those of us who decided to still go looked forward to a respite from the unending news of this tragedy. We hoped we could find peace and beauty on this remote continent far from civilization and its madness.

The Falkland Islands is known as the gateway to Antarctica since so many ships bound for the frozen continent stop here first. The impending visit piqued my curiosity to learn more about this archipelago, made up of more than seven hundred small islands and two main islands. Before my trip, I had only known the Falklands as some islands in the ocean east of South America where Great Britain and Argentina fought the Falklands War in 1982. I was excited to visit the Falklands since few people make it to this little known part of the world. I have always liked exploring remote and exotic places because I like surprises—not the “Surprise! Happy-Birthday kind,” but surprises that are strange and unfamiliar, and shake up my knowledge of the world, and what I know.

Argentina calls the islands Las Islas Malvinas, and still disputes the outcome of the war in 1982. Because of that ongoing dispute, our once-a-week flight in 2001 to the Falklands originated in Santiago, Chile, instead of Buenos Aires, Argentina, even though Buenos Aires is much closer to our destination. As of 2015, tourists still must fly from Santiago through Punta Arenas to reach Mt. Pleasant International Airport in the Falklands.

Wealthy tourists can fly to Antarctica, but most visitors go by ship, leaving either from the Falkland Islands, or from Ushuaia, Tierra del Fuego in Argentina. All ships have to cross Drake Passage, a body of water with a mean reputation, and that sounded like my kind of adventure!

Antarctica
Antarctica is the southernmost continent on Earth with the South Pole at the center—the point from which everywhere else is north. British explorer Roald Amundson was the first to reach the South Pole in 1911. Surrounded by the Southern Ocean, Antarctica is twice the size of Australia and is the only continent to double its size in the winter when ice forms on the bays and harbors. Most of the rocky continent is covered with ice over one mile thick. Only about two inches of snow falls annually on the interior of Antarctica, but it never melts due to the never ending cold. Even though 98% of Antarctica is covered by ice, it is considered a desert because so little rain or snow falls. Most of the moisture accumulates on the edges, near the open water. The wildlife that thrives in Antarctica includes several species of sea birds, penguins, seals, whales, and krill, the tiny shrimp that feeds them all.

All maps of Earth are oriented with north at the top. Since everywhere from the South Pole is north, a topographical convention has emerged that places the Antarctic Peninsula on the left side of the Antarctica map. This peninsula is a long narrow triangle of land reaching northward to about 800 miles from the west side of the continent. The Antarctic Peninsula forms the western edge of the Weddell Sea where Ernest Shackleton struggled to save the lives of his men. 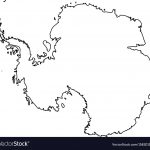 The Antarctic Peninsula is the most popular destination for ships, carrying up to 200 passengers at a time, curious to see this remote land. Only a small number of visitors actually set foot on the continent itself, so I looked forward to being one of them. Many penguins breed on this peninsula and the islands offshore because it is the northern most part of Antarctica where the ice melts earliest in the year. Birds are plentiful at the edges Antarctica, but there are relatively few species represented. Personally, I didn’t care—I just wanted to see Antarctica, and of course, the penguins.

Unlike the early explorers, many of whom died or spent months living in miserable rock huts awaiting rescue, I admit I like a little comfort on my adventures. Good food, a warm bed, and hot water are more my style, but nothing extravagant. This Audubon trip sounded perfect for me.

After reading Endurance as a teenager, I only imagined that one day I might actually set eyes on Antarctica’s white and icy splendor, and witness its desolation; to breathe the same air as Shackleton’s crew, and to gaze at the wide sky they had so much time to ponder as they waited for rescue. Never would I have thought I might watch breeding activities of penguins who are descendants of the colonies that Shackleton’s men once hunted during the many months they survived on penguins for sustenance and fuel.

At last, I would get to experience this remote continent at the bottom of the earth.