On our travels through Bhutan, I became fascinated with the country’s road building. Even in 2007, I could see that the challenge of carving roads from the steep mountainsides with poor equipment meant constant maintenance. During our tour, we passed every phase of road development, from construction crews digging the roadbed out of the steep hillside with huge construction machinery to groups of workers digging out the hillside by hand with only one truck to haul rocks.

Until the early 1960s, Bhutanese hauled their heavy loads on networks of steep and narrow paths that had been used for centuries for travel by foot, mule, or horseback. As of 2003, about 5,000 miles of roads had been built with about 3,100 miles of them paved. After years of work to improve old roads and add new ones, in 2006 one-fifth of the population still lived more than a half-day’s walk from an all-season road.

Violent storms hammer the hillsides during the rainy season, and slides and erosion are common due to the light soils and poor quality of road construction. Despite all of these challenges, the road building continues. Slowly, the schools, clinics, markets, and shops have become more accessible.

When we traveled on the steep mountain roads, we could find birds easily by looking down into the crown of the trees below where the birds were active. Occasionally, a battered truck hauling road-building supplies, or a sedan full of people, drove by slowly. Customarily, the occupants smiled and waved when passing tourists and beeped their horn in greeting. We tried to be gracious and could only hope the unexpected blare of the horns hadn’t spooked some elusive bird. Some of those roads were lovely with a well-hardened center for the vehicles, while others showed signs of recent repair after a slide.

One day while birding east of Trongsa in central Bhutan, we strolled along one of the winding roads until about mid-morning. Turning a corner, we walked into an area where landslides had denuded the slopes, but the road was passable and we continued. Soon, we began to hear rhythmic pinging, metal on metal. 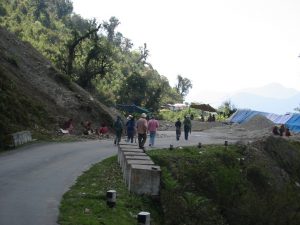 Around another corner, in a rare wide spot on the narrow road, we found a camp for road construction workers. They lived in one elongated shelter covered with black plastic for a roof. Next to it, a dozen workers, shaded against the sun, crouched on a one hundred-foot-long heap of small stones piled three- to four-feet high. The workers, mostly women and teens, squatted on top of the pile and bashed larger stones into gravel-sized bits with handheld mallets and chisels. Across the road from them, two toddlers sat close to their mother while she cracked medium-sized rocks. The younger child played in the dirt while the older one pounded his own little rock with a stick, imitating his mother.

Nearby, another heap of larger rocks awaited them. I never saw anyone using gloves. No one wore eye protection. At home, these safety precautions would be required. The fact that I immediately noted what “was missing,” reminded me that this was an example of my own cultural biases and assumptions as well as my concern for what I considered safety precautions. This wasn’t an option in Bhutan.

In a lull of activity, Pema told us how Bhutan’s poor roads, or lack of roads at all, have been a barrier to good governance, education, health care, and social services, as well as commerce. The Indian government has always supplied skilled Indian crews for road building as a part of the foreign aid it gives Bhutan. In return, Bhutan has awarded most of its construction contracts to Indian companies, not an unusual arrangement in foreign aid agreements. Indian contract workers who do the actual road construction, build temporary shelters out of used lumber, poles, and black plastic on the few shoulders where the roads are wide enough to accommodate them. They live in these makeshift shelters for three or four months, and then return to their homes in India. The downside of this arrangement is that local people never learn how to do the roadwork, a growing problem as labor demands increase.

Because the Himalayan mountain range is the youngest in the world, the soil on top is less compact than on older mountains, resulting in frequent slides when rains saturate the soil. Heavy stone gutters run along the uphill side of the mountain roads to collect excess runoff. At the major dips in the road, a culvert collects water so it will cross under the road and run down the slope to prevent erosion.

One day, we walked along a gutter that looked quite new—no weeds in the bottom, or bits of dirt or gravel. Soon, we came upon a crew of six men and women building the continuation of that stone gutter. One laborer far ahead of the others dug out the square ditch four feet across and two feet deep. Behind him was the mason, who was the only person dressed in blue overalls. He lined the bottom and the sides of the gutter with stones from a pile at the side of the road that a supply truck replenished periodically. The mason placed the top row of stones to exactly line up with his tight leveling string. Two women followed him and added smaller rocks between earth and the stones. Behind the women, a worker filled the spaces between the rocks with mortar.

Another laborer hauled water from the streams or rivulets that rolled down every gully. The last man in line mixed the cement and water on a clean spot in the road and filled the gaps between the set rocks. The finished gutter was square inside and big enough to carry large volumes of water to the culverts that another crew built. Later, we watched a team of culvert workers as they constructed the spillways, setting the sizable rocks into almost vertical slopes. I marveled at the entire process and the ingenuity of the workers to build roads with their bare hands.

Some of the splendid birds we saw during that quiet walk included Grey-chinned Minivets, our first Striated Bulbul, my only Brownish-flanked Bush-warbler, the first Grey-cheeked Warbler, our only Broad-billed Warbler, the first Rufous-bellied Niltava, and White-throated Fantail, (which actually does fan its tail), several Golden Babblers and a flock of Streaked Laughingthrush. These last birds travel in flocks and their chattering sounds really do sound like laughing. I smile whenever I remember their intense movements and joyous vocalizations.

At one stop, I took out my camera and approached a group of workers. They knew what I wanted and paused for a photo without hesitation, pleased that I had taken an interest in them. When I showed them the thumbnail digital image, they grinned with pleasure. In other countries, such an event might evoke demands for money, but these workers thanked me for my attention and then returned to their work. 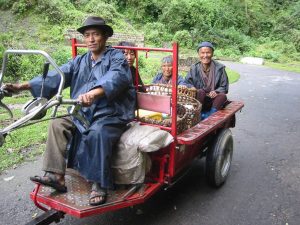 Another day, one of the small, three-wheeled tractors putt-putted slowly down the road toward us and I did the same “may I take your picture” motions. The driver nodded enthusiastically and an struck a stiff, formal pose. When he saw that the photo included the two people sitting behind him in the tractor box, probably hitchhikers, he motioned for me to take a photo of just him and his machine. When I showed him the image, he seemed pleased with that framing.

In several remote places, the one-lane tarmac road had been widened by digging the mountainside shoulder down four inches from the road level, filling the depression with fist-sized rocks, and covering them with dirt. The firm surface supported the infrequent times one vehicle passed another. In addition, free-roaming cattle could graze on the grass that grew from the dirt. It was a creative way to meet the two functions for that portion of the road—pasture and travel surface. 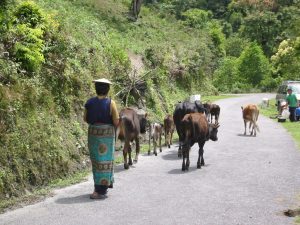 We often encountered cattle strolling along the road, sometimes followed by someone with a long, sturdy stick. Unattended, they roamed the hillsides in search of another blade of grass, creating paths in their wake. I kept an eye out for those paths for times that I might want to get off the road for a moment of relief. It was a risky choice, but with heavier traffic in places and Pema following us, I took it. I did envision someone finding my cold, battered body at the bottom of a gully with my pants wrapped around my ankles. A deep breath quelled my reservations.

On another mountain road under repair, we heard the deep clack of heavy rocks colliding. We approached a young man who stood near a loose barrier of large rocks that curved around the bottom of the slope, almost blocking the road. When he saw us, he yelled uphill. A voice drifted down in reply. I wanted to know what they were doing, but nothing happened until we were clear on the other side of their work area and out of the way. 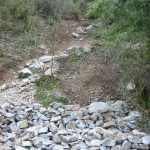 As the birders continued down the road, I held back to watch the workers, fascinated with the road building. The young man on the road shouted uphill again. A large rock, about three feet across, flew out of the bushes, bounced down the slope, and hit the barrier with a clonk. More shouting, and another rock hurtled down the steep slope, but the timing of the bounce caused this one to fly over the barrier, hit on the side of the road, and jump into the void below. The man on the road shouted up and laughed. A loud grunt returned from the bushes.

The uphill man moved into view, dressed in shorts and rubber boots. Next to a large boulder, he picked up a sledgehammer and wacked away, smashing the pieces into a more manageable size for him to kick into a roll. One of the pieces of the boulder refused to move, so he sat down above it and pushed with his feet, grunting and shouting what I can only assume were some colorful words of encouragement. Finally, the stubborn rock loosened up and joined the pile at the bottom. Later, a truck delivered these rocks to the stone bashers we had passed earlier. 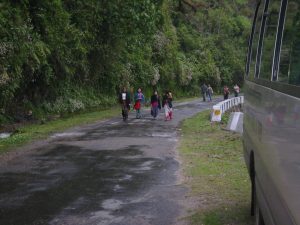 Bhutanese workers maintain the roads once Indian crews build them. This is a paying job available for Bhutanese people without land or marketable skills. The government employs more than three people per mile of road. The workers live in government-built, cement-block houses that are sooty from cooking fires. Several families live in each tiny roadside community. During the dry season, they clear weeds from the hillsides and clean out the gutters to prepare for the rainy season.

When a rockslide blocks a road after days of heavy rain, the first vehicle on the scene from either side returns to the nearest town to report the blocked road. Trucks collect the road workers from their settlements between the towns and deliver them to the blockage. Within an hour of the discovery, workers are attacking the debris with shovels and wheelbarrows. What they lack in heavy equipment they make up for in sheer numbers, and in a relatively short time, the traffic is moving again.

These were good jobs for the workers, but I kept picturing the image of Sisyphus in Greek mythology. For a transgression against the gods, he had to push his boulder up a hill only to have it roll down to the bottom again and again, forever.