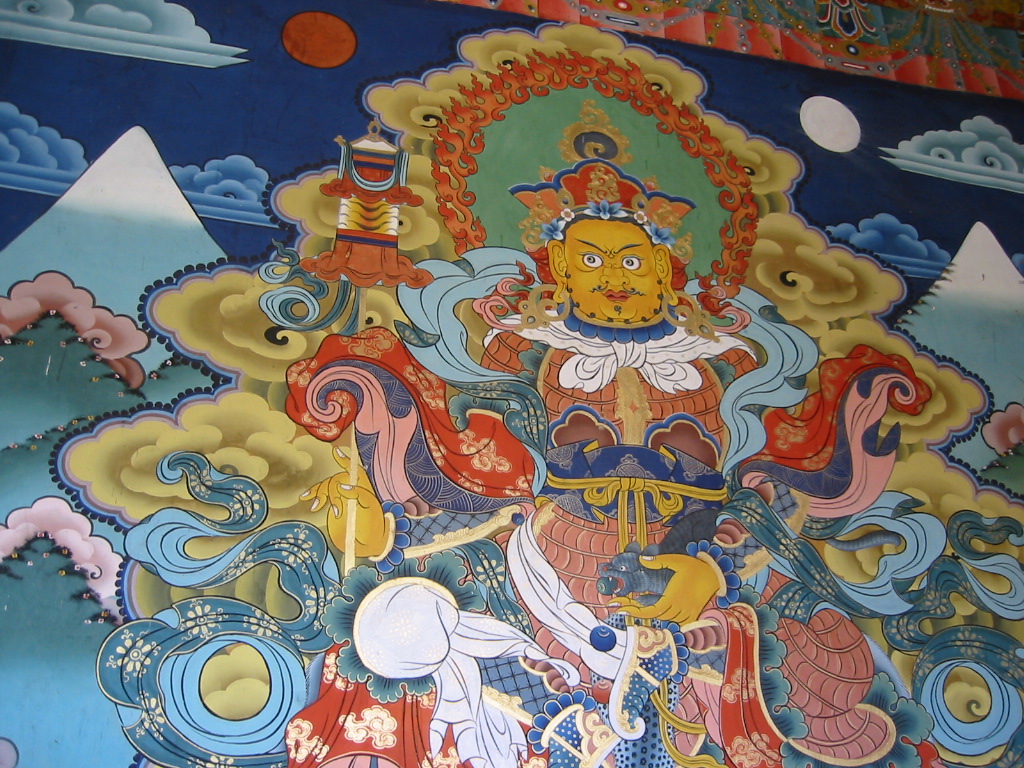 Bhutan is one of those mysterious countries I first encountered as a youngster reading National Geographic. The people’s colorful clothing and their old ornate architecture featured in the magazine’s photos opened my eyes to another fascinating culture in a far off place in the world. As an adult, occasional news items mentioned Bhutan, in particular its precarious political situation and its concept of the Gross National Happiness Index to measure progress. I also knew that for years the country did not welcome tourists, so I had put a possible visit on the back burner of my world travels.

I began birding internationally in 2001 and had taken trips to far away places such as Antarctica and Madagascar. A long list of countries still called to me, and at the age of 64, I felt pressure to do the difficult tours soon, before I aged out of the more challenging physical demands. In 2007, Field Guides offered a three-week birding tour in Bhutan. I jumped at the opportunity to take this tour with a popular birding company known for its excellent guides.

Located in Southeast Asia, Bhutan lies southeast of Nepal, a larger and better-known neighbor. Both countries are squeezed between the geographical giants of India to the south, and to the north the controversial Tibetan Autonomous Region controlled by China.

The landscape of Bhutan stretches from the subtropical plains that border India to the subalpine heights in the north with fingers of land stretching into the southern Himalayas and mountain passes over 12,000 feet. Bhutan’s extremes in geography and climate create a wide range of biodiversity and ecosystems, which provide rich opportunities for observing a great number of the 670 recorded bird species.

A Brief History of Bhutan

The early history of the land now known as Bhutan is uncertain and shrouded in mythology. However, this territory situated along the ancient trade route through Eurasia, known as the Silk Road, maintained its independence while so many places were colonized by the more powerful nations. In the 7th century, a Tibetan ruler ordered the construction of several Buddhist temples in Bhutan, eventually establishing Bhutan as a Buddhist Theocracy with numerous fiefdoms. For centuries after that introduction of Buddhism, wars and civil unrest caused political borders to shift among the small Bhutanese monarchies tucked into the river valleys.

In the late 1800s, Ugyen Wangchuck (b. 1862) the governor of the district of Trongsa in central Bhutan, consolidated power by uniting the smaller monarchies. In 1907, after ruling unofficially for decades, governors of the districts in Bhutan chose Ugyen Wangchuck as the First Hereditary King of Bhutan. He reigned until his death in 1926.

For years, British India had engaged in trade treaties with the various monarchs so First King Ugyen Wangchuck continued to build those ties. Britain agreed to advise but not to interfere with the new monarchy, a demand that has served Bhutan well. First King Wangchuck maintained only weak ties with British India.

Second King Jigme Wangchuck, the son of First King Wangchuck, reigned from 1926 to 1952 and continued his father’s work. Bhutan was largely unaffected by the Great Depression in the United States and World War II because of its isolation. When Britain pulled out of India in 1947, all political ties with Bhutan officially ended. However, Bhutan continued to welcome advice from India and Britain on international matters. At the time, Bhutan lost some lowland areas to Britain but in return it received an annual stipend from Britain, and later, from India.

Third King Jigme Dorji Wangchuck, who reigned from 1952 to 1972, began the country’s modernization in response to the Chinese annexation of Tibet in 1959. As part of a plan to increase international ties, Bhutan allowed a few closely monitored tourists to enter the country. The king believed that Bhutan would be better recognized as a nation if it became a democracy like Britain. Third King Wangchuck began the long process toward democratization by establishing criteria for citizenship in the Kingdom of Bhutan in order to deal with increasing immigration. To be a citizen, the applicant had to have either a Bhutanese father or proof of ten years residence in Bhutan. King Wangchuck also banned further immigration of Nepalese, who were the bulk of the new immigrants.

During the next twenty years, Third King Wangchuck moved Bhutan out of isolation and into global participation as a democratic nation. He established a National Assembly (the first unicameral Parliament), developed a Bhutanese Army, laid the groundwork for an educational system throughout Bhutan, joined the Universal Postal Union, and in 1971 established Bhutan as a member of the United Nations. Third King Wangchuck officially ended feudalism, redistributed land to the poor, and built roads and infrastructure in the country.

Third King Wangchuck wanted his people to have good governance and a sustainable, equitable economy. He wanted to preserve the treasured ecology of the country and the cultural vitality while at the same time moving toward modern democracy. For all his efforts to bring Bhutan into the 20th century, he became known as the “Father of Modern Bhutan.”

After the sudden death of Third King Wangchuck in 1972, his successor, Fourth King Jigme Singye Wangchuck, reigned from 1972 to 2006. He further accelerated the modernization of Bhutan by focusing on self-sufficiency and expanding the country’s income. By the early 1980s, cautious Bhutan became more welcoming to visitors by establishing a national airline officially named Royal Bhutan Airline. Bhutan’s Airline is commonly called Druk Air in a nod to the king who is called the Druk Gyalpo, which means the “Dragon King of Bhutan” in Dzongkha, the national language.

In 1974, Fourth King Wangchuck, made an off-handed remark to his advisers about promoting gross national happiness instead of the gross national product used by other countries to measure development. He outlined four important goals that he derived from his father’s work: good governance, sustainable socio-economic development, preservation, and promotion of culture and environmental conservatism. These goals are now enshrined in Bhutan’s constitution passed by the National Assembly in 2008 and established as an essential part of Bhutan’s new democracy. The tool for measuring that dream is now known as the Gross National Happiness Index and the country’s measurement for successful development. This is a remarkable concept that continues to evolve as more countries work to incorporate the idea of a Gross National Happiness Index.

Bhutan has three primary ethnic groups. The Ngalop and Sharchop people practice Buddhism and speak Dzongkha. Together, these two groups are known as Drukpas. The third primary group is the Lhotshampa who practice Hinduism and speak Nepali. Before Bhutan’s first official census in 1988, demographic estimates varied widely.

The most powerful of the ethnic groups are the Ngalops who first came to Bhutan from Tibet in the 9th century and now inhabit the northern and western part of the country. The Sharchops are a mix of Tibetan and other ethnicities from adjacent countries and they now inhabit the southeastern part of Bhutan. The Lhotshampas, which means “southerners,” began migrating to southern Bhutan in the late 19th century. Government policies discouraged their movement into the higher positions of Bhutan although some Lhotshampas hold government positions. As the numbers of Lhotshampas grew, the government claimed that many of them were illegal immigrants. Changes in Bhutan’s immigration policies lead to violent protests among the Lhotshampas who demanded their place in the country’s emerging democracy. The Bhutanese government responded by forcing out more than 100,000 Lhotshampas from the country. I would learn about all of this in much greater detail after my trip to Bhutan in 2007, and I discuss Bhutan’s ethnic rivalries in further detail.

Good Timing for a Visit

By a stroke of luck, we toured Bhutan on the cusp of a new king’s coronation. Fifth King Jigme Khesar Namgyel Wangchuck became Bhutan’s first constitutional monarch in 2008, the year after our tour. Two years prior to the coronation, his father, Fourth King Wangchuck, abdicated the throne to emphasize the transition of the country to a democracy, diminishing the power of the monarchy by design. He arranged for the new king’s formal ascension to the throne to be on November 6, 2008 at 8:31 a.m., deemed the most auspicious moment to assure a successful reign.

A coronation is usually a once-in-a-lifetime experience for any citizen of a monarchy, so Bhutan was pulling out all the stops to prepare for this event. During our visit, we saw people throughout the country building, paving, and widening roads, as well as painting houses—at least the side of the house seen from the road—in preparation for the new king’s coronation and the expected influx of visitors.

I felt fortunate to have this rare opportunity to visit Bhutan but had no idea that we would be there at such a crucial time in its democratization. This became one of those coincidences that make birding trips so full of surprises. Oh yes, and I also planned on seeing as many of Bhutan’s 670 recorded species of birds as possible.