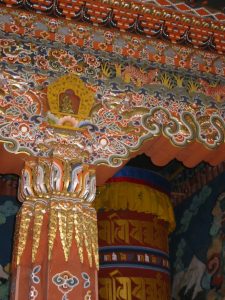 Bhutan held its first countrywide general election in December 2008, a year after my visit and after the coronation of Fifth King Jigme Khaser Namgyel Wangchuck. I hoped the transition to a democratic constitutional monarchy would help diffuse the internal tensions. The elected members of the new parliament agreed that the conflict between the Drukpas and the Lhotshampas needed to be addressed. The governments of Nepal and Bhutan resolved to negotiate a solution to the refugee situation. Nothing came of it.

In 2013, Bhutan held its second national election and an overwhelming majority voted for Tshering Tobgay to be the new prime minister of Bhutan. He had been the Leader of the Opposition in the National Assembly since the first election in 2008. Based on media interviews and written assessments, Tobgay seemed like a capable leader well grounded in the values expressed in Bhutan’s Gross National Happiness Index.

Educated in the United States, Tobgay knows how messy a democracy can be and he has not been shy about admitting the shortcomings of Bhutan’s development. As recently as October 2016 at an international meeting, Tobgay told the prime minister of Nepal that Bhutan would take the initiative to resolve the problem of refugees—soon. Much as Tobgay might like to, he cannot act alone as the kings were once able to do. The point has become moot since most of the refugees from the camps in Nepal have been resettled. Some 80,000 refugees settled in major cities in the United States, with the largest populations settling in Texas, North Carolina, Indiana, Georgia, and New York. 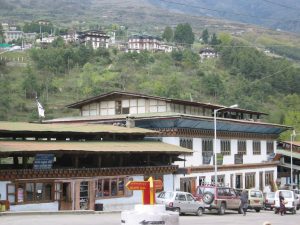 By 2016, the World Bank reported good economic progress in Bhutan. The economy relies primarily on tourism, small manufacturing, and the sale of hydroelectricity. Every five-year plan includes an analysis of the problems in the country at the time the government issues a new plan, along with realistic goals for the next five years. In 2013, Bhutan implemented the Eleventh Five-Year Plan, in part addressing labor issues that continue to plague the country’s development.

Bhutan’s struggles with its transition to a democracy compare favorably with two African countries where I lived during the late 1960s. In 1964, I attended Malawi’s independence ceremony and joined the cries of freedom in a stadium full of new citizens. Kamuzu Hastings Banda became the new president and my Crossroads Africa team of college students enjoyed dinner with the new cabinet during that momentous summer. The ministers were optimistic about their new nation and seemed capable and confident. By fall, half of the cabinet members were in jail or had left the country in fear for their lives. In 1974, the “savior,” Kamuzu Hastings Banda, declared himself “President for Life.” The iron-fisted leader who ruled until 1994, crushed the hopes of his people for freedom and prosperity.

The British Protectorate of Tanganyika had acquired its independence from Britain in 1961, and the people had similar high hopes. In 1964, Tanganyika joined with Zanzibar to form the United Republic of Tanzania. As a Peace Corps volunteer in Tanzania, I taught at a girls’ secondary school from 1966 through 1967. A leader in the independence movement and the first elected president during that time, Mwalmu Julius Nyerere, tried his best to lead Tanzania forward. I was excited to be a part of this dramatic emergence of a new country, but by my last term of teaching, the government leaders’ corruption and greed had begun to undermine the gentle and well-respected Nyerere’s efforts. I left Tanzania with a heavy heart. 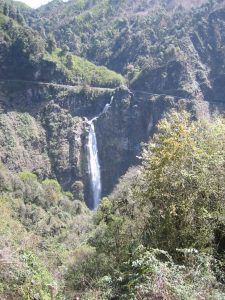 We in the United States are still uncomfortable with our chaotic democracy after more than 200 years, so it’s no surprise that Bhutan struggles to establish a strong democratic foundation. To make profound changes from a monarchy with a benevolent king to the chaos of a democracy in a relatively short time is a delicate and difficult dance.

I am sad that the ethnic clashes have not been resolved in Bhutan, just as I am distraught about my own country’s unresolved immigration and racial challenges. What a heavy burden the kings carried for their small country while surrounding nations swirled powerful external forces, precipitating changes and chaos that Bhutan still must deflect. I will be watching Bhutan with the hope that they weather their transition and that all their citizens will be happy. I want this for my own country as well.

A Rare Bird vs. a New Airport

A favorite memory from my tour of Bhutan comes from a clash between progress and birds. We spent a night in the glacial Phobjikha Valley, about 9,800 feet above sea level. This protected area is thirty miles east of Thimphu and separates western and central Bhutan. Government planners saw the need for a second international airport to take the pressure off the one located in Paro. The flat landscape of the Phobjika Valley seemed to be a good option. However, this isolated valley is one of only three places in the world where the sacred and endangered Black-Necked Cranes winter. 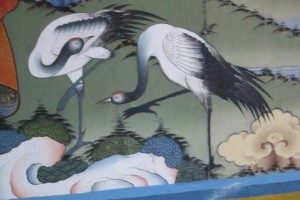 Bhutanese residents in Phobijkha Valley alerted the airport planners that the long-necked cranes could not avoid the recently installed electrical wires during their take offs and landings and many cranes died. They knew that adding an airport to the valley would devastate the birds. In response to those concerns, the planners eliminated that site from consideration for an airport. The government also buried the electrical wires to protect the birds. As of 2017, Bhutan still only has the one international airport in Paro.

The cranes had left the Phobjikha Valley for the season when we visited, but other birds delighted us. Richard’s excellent notes helped me remember that in the Phobjikha area, we saw Lesser Racket-tailed Drongo, Golden-throated Barbet, Striated Bulbul, Black-faced Warbler, White-throated Laughingthrush, Whiskered Yuhinia, and Black-throated Parrotbill, among others. Just reading these unusual bird names, many years after visiting Bhutan, brings back the joy of my trip. 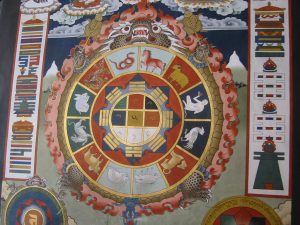 When I left Bhutan in a post-trip glow, I wrote in my journal, “I found the country stunningly beautiful and the birds exquisite, measuring up to my highest expectations for a birding trip. As a birder, the care of the environment warms my conservationist’s heart. Bhutan is a bright light for me in a world that seems headed in the wrong direction. I was so glad my birding interests led me to an uplifting visit to that wonderful country.”

Only later did I discover the complexities that plague the country in spite of the best of intentions. Since then, I have followed Bhutan’s progress, especially the efforts to protect this environmental paradise. In his TED talk in 2016, Prime Minister Tobgay stated that 70 percent of the country is still forested, so I am thrilled to know that Bhutan is staying firm on the protection of the environment, regardless of political issues that challenge land use.

The Bhuddism-based culture, the architecture of the dzongs, the friendly people in their traditional dress—all of these and more, delighted me every day during my three weeks in Bhutan. More than ten years later, the comments I wrote as I left Bhutan still stand. At the time, I was a novice birder and this birding trip stands out for me as one of the best, even after sixteen international birding trips to twenty different countries. Recollections of encounters with such a range of bird species on high mountain passes, by rushing rivers, in deep valleys, in the tops of trees, and along the steep hillside roads, still bring a smile to my face.