On our last morning, I awoke with a sense of sadness and disappointment that our wildlife tour in Madagascar was coming to an end. My traveling companions felt the same. We had a few precious hours to enjoy this unique and environmentally rich country, so I jumped at the opportunity to see one last endemic bird in the Perinet rainforest. After that, we had a three-hour drive to Tana, and a long plane ride home.

The Search for One More Bird

Rivo learned from another guide that a Madagascar Flufftail had been seen a short drive from our lodge. It was a long shot, but Rivo told us, “The flufftail will defend its territory even out of breeding season, and I am optimistic that it will be calling.”

That was enough for me—I was ready to go! A light rain was falling when we reached the site. Most of the tired birders stayed in the dry van, but I popped up my umbrella and joined six diehards who followed Rivo into the wet forest. My soggy shoes squeaked as I walked along the muddy trail, but I was warmer than I would have been at home in Oregon in late October.

At a sharp bend in the trail, Rivo signaled us to stop and settle ourselves. We quietly folded our umbrellas, strange objects that could scare local birds. Fat raindrops rolled off the rainforest canopy, quickly soaking us. Rivo hooted, imitating the flufftail call, challenging the bird to defend its territory. After several tries, I heard a soft sound from far back in the forest. Was that the bird? I wondered, but Rivo did not seem excited.

Rivo hooted again. We peered into the lush underbrush hoping for any telltale movement. Glossy leaves shuddered and flicked off the falling drops. Was that quivering leaf a bird, or just another drop off a leaf?

One of my fellow birders picked a leech off her neck. For ten long minutes, we waited for another hoot that did not come. Rivo shrugged his shoulders and we turned back for the bus. We did not see the bird.

On the trail back to the bus, my feet squishing in my soggy shoes, I asked myself, What am I doing here?

Then I remembered the delightful lemurs, stunning birds, forests teeming with new creatures, and the interesting people we had seen and enjoyed in a place none of us had known before our three weeks in Madagascar. This is what I want to remember, the wonderland of the cute, the exotic, the silly, as well as the less delightful creatures that added interest to our trip.

I had been prescient when I worried about the country’s environmental concerns before taking the trip to Madagascar, and, the degradation of this unique country that has resumed since then. After our trip in 2004 and until 2009, President Marc Ravalomanana designated several areas we had visited as national parks and wildlife reserves. This news greatly buoyed my spirits but the momentum did not last. 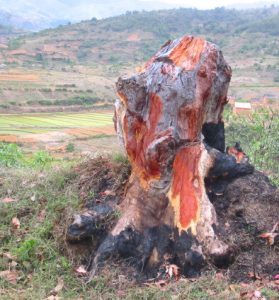 In 2009, Andry Rajoelina, the opposition leader, led a violent coup to become the president of Madagascar. He rescinded protection of the environmental preserves, after which, international conservation groups cut off all funding. The park management collapsed. With the country in chaos, 82 percent of the people sank into extreme poverty. Desperate, people killed wildlife for food and poached trees for export.

By 2015, eleven years after our visit, the population had increased from 18 million to 23 million due to local customs and weak reproductive health care. This growing population exacted a terrible toll on the already eroded and parched land. Madagascar’s first legitimate president, Hery Rajaonarimampianina, was elected in 2015 and has done nothing to change the destructive policies of his predecessor. Redemption was possible when we visited, but only with strong, well-funded, and organized efforts. As of 2018, the future looks tragic for Madagascar’s environment and wildlife.

I don’t regret visiting Madagascar in spite of its current problems. I remember the idyllic forests filled with a rich variety of wildlife, delightful to see and filled with promise for new discoveries. In contrast, memories of the enormous swaths of sterile red clay still haunt me. There is little hope of recovery for the land that supports such an important collection of plants and animals.

So, what good did our visit do for the promotion of tourism if there is nothing left for visitors to see? And what good did it do now that we must cut back on travel to save the planet? My heart aches both for the people of Madagascar who can no longer depend on the land for a sustainable lifestyle and for the natural resources that will soon be gone because of the people’s increasing desperation. Often, I have thought about what will happen among the people who live in Madagascar. Will they become violent or hopeless? I ask myself, Is this what we all could face if changes are not made soon to save the global environment?

And what of the possible medical discoveries predicted by scientists, like the recent use of the rosy periwinkle known for its anti-cancer properties, especially for leukemia and other blood cancers? I must count on a miracle.

This is a sorry conclusion for my remarkable trip to Madagascar, but I continue with my fight for a green planet. I minimize my environmental impact by living a simple life and making financial gifts to organizations that fight for a healthy planet. Even though I will not be around to see the outcome, I hope future generations will see the amazing creatures of Madagascar, just as I did. Now, more than ever, I realize how fortunate I have been to see this land firsthand.