My favorite picture of Damiana was taken after we had been camped next to the family’s palm-roofed palapa for a few days. She and Alejandro were grandparents to the many children who came and went during our stay. She has one arm through his, the other fisted on her hip. Her head is tipped slightly away with a coy smile. She is wearing a simple light blue cotton dress and a crown of grass that Alejandro made for her. He mugs for my camera, his white hat cocked rakishly, a grin on his leathered face.

The hotelkeeper in Guaymas recommended San Carlos Bay when we asked for a quiet place for Robert to recuperate from a case of Montezuma’s Revenge, recurrent diarrhea that had been bothering him for weeks as we rode our bicycles into Mexico. The idyllic description of the bay caught our attention, though his fascination was clearly with the film crew there working on Ketchy Vientydos. Catch-22.

After cycling a mile or so off the highway, we passed a large trailer camp for Americans. Half a mile further, a sign next to the dusty track that continued to the right and up the valley, informed us that access to the Catch-22 filming area was prohibited. We turned left down the other dirt road that rimmed the sparkling turquoise water lapping up onto the bright white sand of San Carlos Bay. A line of palapas perched on the crest of the beach between the road and the bay. The dry palm leaves of the roofs rustled in the wind. The area was deserted save for a silver-haired woman clamming in the shallows. We kept an eye on her as we pedaled past the ten make-do shelters, stopping beyond the last one.

She waded ankle-deep where the sand met rounded stones, her light skirt whipping in the wind. She stared into the clear water and occasionally she stooped, dug with a spoon and then plunked something into her rusty coffee can. When she turned and walked in our direction, she spotted us. Her face lit up as she quickened her pace.

“Buenos dias. Como estan?” she said when she got close enough for conversation. An apron rode high on her ample belly; her braids were pinned to the back of her head under a scarf. She welcomed us like old friends, smiling, chatting and leading us toward her palapa though we had never met. The others were out fishing and would return soon, she said. She told us to call her Damiana.

Her can was half full of small clams, not much bigger than a silver dollar, each shell decorated with its own unique black and white pattern. As she chatted, Damiana filled a green plastic bucket with seawater, poured the clams into it with a clatter, and set it in a shady corner.

We asked about camping, and she showed us with a broad wave where other Americans had lingered, on the shore and under the trees across the road. She graciously invited us to set up nearby.

It was still early in the day, so we thanked her and set off to explore a bit more before deciding. There wasn’t much more. At an intersection, we stayed on the road around the bay that became soft sand. We pushed the bikes for another half mile to where it became a trail at the base of thorn covered slopes that defined the northern side of the bay. The cobalt blue of the deep water nearby looked delicious and soon we were swimming among the tiny wavelets worked up by the light wind. We dried off and munched on a snack. Relaxing on a patch of warm sand, gazing at the clear sky, I knew I was ready to stay.

We then returned to the palapa two fishing dories had been pulled up right in front, their outboard motors cocked up on the sterns. Three pre-teen boys were tossing fish guts into the water and then zinging rocks at the hungry white terns. Robert joined the boys, and they laughed at his incompetence, but cheered his efforts. They wounded and killed two terns and the boys plucked off the feathers, joking that there wasn’t much meat. I didn’t like the joke but restrained myself. I would stop boys doing that at home, but this was not home. Did I sense a little sheepishness as the boys worked on the tiny birds? Were they expecting a rebuke? It didn’t come from the four weather-roughened men who watched from the protection of the palapa. 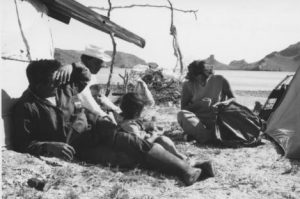 The oldest man, a grubby white cowboy hat tilted to shade his eyes, waved us to his side. Robert slid down beside him, always ready to chat, unconcerned that they shared no common language. After a greeting, I strolled around to talk with Damiana, who was preparing the mid-day meal.

She stood inside the shelter working on a scarred wooden table where everything lightweight was held down with rocks. Her stove was an upended fifty-gallon drum cylinder, the top and bottom cut out. A heavy screen laid on top held a metal plate on which she was toasting tortillas; a covered pot sat to one side.  Another heavy screen was attached inside and two feet below the top to hold the firewood. She poked tiny sticks through a hole in the side of the drum to feed her fire.

Damiana was pleased we had returned and she lifted the pot lid for my inspection, or maybe to tempt me. Steam billowed out along with the aroma of tomatoes and fish. There was no comparison to the nutritious but tasteless snacks we carried with us. She invited us to join them for the meal but I hesitated, not wanting to eat their food out of consideration for what I presumed was their need. Breaking bread is a ritual I understand intellectually, but I worried whether they could spare  the food. I stuck my head around the edge of the palapa and told Robert we had been invited for the meal and expressed my concerns. He had no such qualms so I accepted her invitation, trusting we could return her hospitality in some way. Later, our offer to pay for groceries in Guaymas seemed to surprise them but was graciously accepted, but it helped me with my personal balance of accounts.

We chatted while she tended to her tortillas and she delighted in helping me find the words I needed to express myself, laughing at my frustration. Their large family lived in Guaymas and the palapa was their summerhouse with its two sided cooking area and a little room enclosed by reeds for sleeping. When the last of the tortillas were done, I called the others. Damiana introduced Alejandro who crinkled his ruddy face in response. The three other men were Rosalio, Lingo, and Jorge. They were stockier than Alejandro and spoke a language among themselves that I did not recognize, probably an indigenous dialect. The four men fished when the weather allowed and sold their catch to their cooperative.

Damiana ladled us each a steaming bowlful of the tomato base filled with chunks of onions, fresh fish from the day’s catch and clams straight from the bay. She carefully gave Robert a prize – one of the fish eyes. He was the man, the honored guest. Ever the adventurer in spite of his sore gut, Robert sucked the staring orb into his mouth with glee and said it popped like a grape and tasted salty. I took his word for it.

It was the first of many meals we ate with the family and the fishing crew. The food was simple, based on the clams and fish available and always fresh tortillas. Occasionally, we got a special treat, like flour tortillas from town split sideways with thin slices of the local cheese melted inside, a delicate kind of quesadilla.

Go to the next chapter: Going Fishing…Or Not