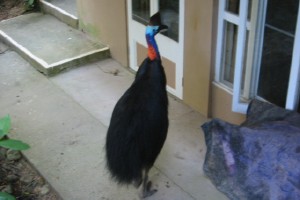 My group of fourteen birders and our Audubon guide, Steve Robertson, gathered in Cairns, Queensland in November 2007, springtime in the southern hemisphere. Migrating birds flying north to their breeding grounds were at their peak of color when our tour began. In contrast to birding in developing countries, I knew Australia would be relaxing and easy, offering comfortable accommodations, familiar food, and reliable transportation. I looked forward to getting to know Australia through my birder’s eyes.

Queensland, the second largest of the six Australian states, is located in the northeast corner of the continent. The great variety of habitats there contain a wide diversity of bird species. All of our birding in Queensland took place on the triangular Cape York Peninsula that points up at New Guinea like a spike, bracketed by the Gulf of Carpenteria to the west and the Coral Sea directly east. The Great Barrier Reef, one of the Seven Natural Wonders of the World, lies off the eastern shore of Australia and is the largest structure made by living organisms on Earth, spreading south 4,600 miles from the northern tip of the continent.

The hub of our birding adventures in Queensland was Cairns—(pronounced “Cans” by Aussies)—a coastal town at the base of the Cape York Peninsula. During my layover in 1986, I had spent two nights in Cairns on my way to the Earthwatch project on Lizard Island and I remembered that first evening in Cairns when a noisy chattering drew me up to the second-floor balcony of the hotel. To my delight, I discovered an India Almond-tree, a tall tropical tree with broad horizontal branches and a distinct symmetrical crown—a tree I had first seen during my stay in Tanzania. That evening, a cloud of bright green parakeets flew into the tree’s canopy. When startled, these lively birds took flight and quickly returned to the tree, again and again, seeming to argue and fuss the whole time. As darkness drifted over Cairns, each bird found a final roost for the night and eventually relaxed into sleep. I never forgot that cacophony of chattering birds, and when I accepted the invitation to travel again to Queensland for the Audubon birding trip, I hoped I’d see those fussy parakeets again.

Cassowary House, named for our target bird on the first morning in Queensland, is a small B&B located deep in the rainforest. About 20 minutes into our hour-long drive, our van crested a steep escarpment and the soaring cliffs and endless plateaus of the Atherton Plateau spread before us. This isolated, diverse, and fertile plateau, also called a tableland, covers more than 12,000 square miles. It is known for expansive and breathtaking scenery and it is home to ancient rock paintings. On the eastern side of the plateau it becomes part of Queensland’s Great Dividing Range, a substantial mountain range that runs 2,300 miles north and south. It is the third longest, land-based mountain range in the world. The annual rainfall in this area can exceed 100 inches and supports the only tropical forests in Australia. Although the tableland lies in the tropical latitudes, the heat is moderate at elevations above 1,500 feet. The mild weather and the rich volcanic soils make it a productive agricultural area that supports diverse and abundant wildlife.

Our van turned at a small sign for Cassowary House, and inched down a short drive into thick, tropical jungle. One of Australia’s foremost birders, Phil Gregory, and his wife, Sue, own this small B&B. Before moving to Australia, Phil was headmaster of a school in Tabubil, New Guinea. On school breaks, Phil and Sue flew to Queensland, drawn to the area’s dramatic landscape and diverse birding opportunities. They soon realized there were few accommodations for birders in this bird-rich area. When the couple left New Guinea and moved to Queensland, they bought a house deep in the tropical forest and developed the property to attract birds with feeders, plants, and other bird-friendly features for the pleasure of visitors like us.

Our guide Steve glowed when he spoke about Phil and Sue’s work on behalf of Queensland’s birds. Unfortunately for us, Phil was away guiding a birding trip during our visit. A few years later, I would discover that Phil would be leading a trip to New Guinea, so I jumped at the chance to join him. I had remembered Phil’s sweet forest retreat for birders in Queensland and later found that his reputation as a bird expert was well earned.

Breakfast with the Birds

A chorus of chirps and twitters surrounded us as we climbed out of the van at the side of Cassowary House. Sue appeared around the corner of the house and warmly welcomed us. She led us up a flight of outside stairs to a raised porch where a fully set picnic table awaited. Birds of all sizes and colors flew to a variety of feeders and platforms that hung from the limbs of a large tree that shaded the porch and patio. More birds waited nearby for a turn at the seeds, suet, and slices of fruit. We paused to enjoy the amazing scene until Sue invited us to partake in the fragrant buffet set on a table in the doorway to the kitchen.

From our seats on the elevated porch we enjoyed eye-level views of the hungry birds while we hungry humans feasted on Sue’s scrumptious homemade muffins, egg casserole, and local tropical fruit, a hearty breakfast topped off with strong coffee.

With all the avian activity, I soon found it difficult to concentrate on my breakfast. There were so many birds I had never seen. Steve helped identify as many as possible as they flew in and away from the various feeders. He pointed out a Spotted (Green) Catbird, which is a stout, medium-sized bird with a red eye. Then he identified a Yellow-spotted Honeyeaters, olive in color with a yellow patch behind the ears. I hardly had enough time to find the field marks before another bird took its place. An Emerald Dove, which has a grey-mauve body and iridescent emerald wings, pecked the ground below the feeding frenzy while a pair of Yellow-throated Scrubwrens bounced amidst the fallen leaves searching for tasty tidbits.

We were sipping our last cup of coffee when Steve whispered from the porch railing, “Cassowary.” We tiptoed to the rail next to the stairway and looked down. Below us a huge ostrich-like black bird stood calmly on the cement patio next to the glass doors of the two guest rooms. Sue leaned out from the kitchen and quietly noted, “This bird is a female Southern Cassowary. We are in her territory, so she stops by most days.”

When the cassowary moved, her shiny black feathers shimmered in the dappled sunlight. The cobalt blue of her featherless neck faded to aqua closer to her face, and her wattles, soft pieces of bright red flesh, wobbled as she seemed to tiptoe around the tiny patio. She looked up into our faces and stretched to her full six feet, interested but not alarmed, maybe begging but polite about it. Once the cassowary’s curiosity was satisfied, she gently pecked at the fruit rinds and cores that Sue encouraged us to toss down to her. The giant bird was so comfortable with us that she soon collapsed onto her gangly legs and rested on the cement pad, ignoring the commotion above her. Mesmerized by such a magnificent bird, I thought, How lucky for us that she is visiting while we are here!

Of the 751 known species of birds found in Australia, the giant flightless cassowary is one of the most primitive. The name may have originated in Papua New Guinea where kasu means horned and weri means head. Both sexes have a horny helmet called a casque. This hard protrusion is made up of a sponge-like material covered with a thick layer of keratin, the material of fingernails. Ornithologists have not yet determined the function of the casque, but recent research suggests that it may serve in part as a sexual display. It might also aid in vocalizations, providing a resonance chamber to amplify the female’s call when she is ready to mate.

Most birds have a muscular pouch filled with stones called a gizzard that grinds grains and seeds, but this endangered dinosaur of a bird does not. As a result, every cassowary provides an important function in the tropical forest. The birds’ gut only digests the flesh of the fruits leaving the seeds unchanged, so the wandering cassowaries spread the seeds widely where they germinate in the forest.

All cassowaries are solitary. The difference between the sexes is subtle and hard to distinguish unless they are standing together, which is a rare occurrence. The six-foot females are generally larger than the males, and are more colorful and more aggressive. A female’s territory will include those of several males. Each male southern cassowary will claim up to two square miles for his own, which might overlap with his neighbors’ territories, but all the males get along well.

Male cassowaries build a nest that is basically a scrape in the ground lined with leaves and grass. When the female is ready to mate, which occurs several times a year, she vocalizes a booming drumming and the available males respond. Once she chooses her mate, she lays from three to eight eggs in his nest. Then, she leaves them in his care.

Each cassowary egg is about five-inches-long and they vary in color from shades of brown, blue, and green. The male guards and incubates them for about fifty days, never leaving the nest. Once the chicks hatch, the male shepherds the brown-striped, downy bundles of joy through the tropical forest for nine months. The adult male cassowary is so aggressive during the nine months the chicks are in his care that visitors at the Cassowary House are advised to stay clear. If they are staying in ground-level rooms, they are warned to stay inside when the male southern cassowary and his family are nearby. Even if a male’s featherless blue and orange head and neck invite closer inspection, or his soft looking feathers make a birder’s hand itch to pet him, the staff cautions visitors to remember that a cassowary’s kick is likened to that of Bruce Lee,—except Bruce didn’t have a five-inch toenail behind his punch that could easily disembowel whatever threatens. We were reminded that it is the cassowary’s perception of the threat that counts, not ours!

After some nine months of caring for the chicks, there is little time for the male cassowary to relax once his parenting work is done. He has to chase away his latest offspring so they will find their own territory and stop freeloading off his fruit patch.

I was tickled to learn that the female had several males residing in her territory for her to choose among and that the males did the hard work of raising the chicks. It was pure anthropomorphism on my part, putting human traits on a bird, but those were my thoughts!

As we drove away from Cassowary House that morning I thought, How wonderful to be living peacefully with such a splendid bird!