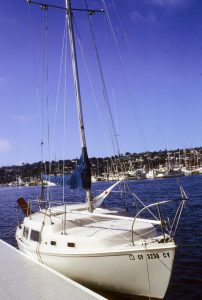 After terminating our bicycle trip in Mexico for safety reasons, we retrieved our VW bug from Portland for another try. In San Diego, the sailboat filled bay called to us. After a few sailing lessons, the call of the sea was irresistible.

Our first boat, the Valhalla, was a twenty-five foot fiberglass boat built for day-sailing in protected harbors. Undaunted, we spent two months “beefing her up” for the open ocean and avoiding the dock police who did not allow live-aboards. I helped as needed, studied “Navigation Made Simple” and practiced with our gorgeous but totally outdated sextant.

We sailed south in June (1969), passing many cruising sailboats coming north to avoid the chubasco (hurricane) season. After a month enjoying the Baja California coast on our way south, followed by the summer in Mazatlan and one hurricane and we were heading back north, passing the same cruisers coasting south for the winter on the forty knot winds that frustrated our return to San Diego.

No wonder we had adventures.

The Privateer was ideal. A classic wooden boat, built as the flag ship for the Cruising Club of America in 1930 and in good shape when we bought her. Heavy, beamy and beautiful. With sophisticated equipment and aids, the adventures were of a different kind, less risky but as much fun.

Tricks of Tired Minds: One night at sea. Our exhausted minds played tricks on us almost making that night our last.

Mazatlan Hike: Escaping the Mazatlan heat, we discovered a delightfully remote, relaxing and best of all, cool trail in the nearby mountains. But then there were the dogs, blisters and lack of food.

Cyclone: Expecting a lesser blow, we rode out a wild cyclone in Mazatlan harbor.

Valhalla: Almost to San Diego, lack of wind drives us to actions not considered by sane minds.

Two Dinghies: We liked to think we were competent sailors, but too many times, experience proved us wrong. A sense of humor helps.

Panic: . Who ever thought terror might accompany routine boat repairs?